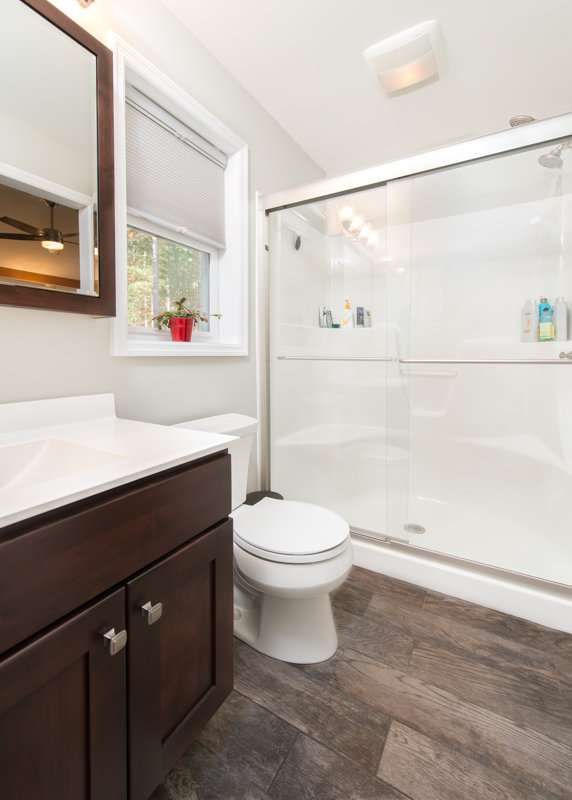 No one knows exactly who invented the first toilet, but we do know that toilets were being used in some form more than 3,000 years ago. One of the crudest examples of an ancient toilet can be found in medieval England. The castles there had tiny rooms containing a seat with a hole that led directly outside. Waste would drop right into the castle moat, where it would accumulate until it was swept into the river—the same river where people downstream bathed and got their drinking water.

Plumbing systems and toilets, as well as their immediate surroundings, have come a long way since then, and they continue to evolve. Home improvement website Houzz.com conducted a study of bathroom trends and found that homeowners who upgrade are going after specialty features, including more luxury items. This is often accomplished at the expense of adding
more space.

Tricked-out toilets are the norm in Japan and are reportedly seen in upwards of 70 percent of all homes there. The special features have created a lot of publicity in the U.S., some of it amusing, some more analytical. Options include a heated seat, warm-water cleansing, a flushing sound to obscure “other” noises, remote control, customized settings, air purification systems, music …
the list goes on.

It’s taken years, but many believe that luxury toilets are finally beginning to catch on in the U.S., where, until only recently, even a bidet was seen as unusual, even suspicious. Today, 5 percent of new or remodeled master bathrooms are equipped with a bidet, according to Houzz’s 2015 Bathroom Trends Study.

John Smithman, owner of The Plumbing Place, in Sarasota, Fla., says that a few years ago, “only a very small percentage of Americans knew about these types of products, whereas today, it’s much, much more common.” He adds that most of his customers are well traveled and are likely familiar with the elaborate toilets seen outside the U.S. In addition, the Internet has helped spread awareness of bidets and washlets.

“It’s starting to gain such strong momentum, we’re selling probably double this year than we were last year,” Smithman says. (Take a look at the latest toilet product releases here.)

Another trend seen today is for bathrooms that feature separate areas for the toilet.

Given size constraints, many homeowners may not have the space to completely isolate the toilet from the rest of the bathroom. A compromise that many are opting for is the “pony wall” or knee wall. These partitions are typically only waist high and are sometimes designed to accommodate other bathroom fixtures, such as shower doors. “We’re creating another space visually, but not necessarily creating a separate room,” says remodeler Jesse Ososki, owner of Jesse Ososki Art, based in San Francisco. He adds that most bathrooms in his market aren’t big enough to completely enclose the toilet. Nationally, more than 60 percent of master baths are 70 square feet or larger, but the majority of the bathrooms that Ososki’s company remodels are between 50 and 70 square feet.

Tim Shigley, president of Shigley Construction Co., in Wichita, Kan., says bathrooms must be a minimum of 55 square feet in order to put up walls around the toilet. “For all my customers,” Shigley says, “it’s more about accessibility. Get in, get out, be comfortable.”

Nearly half of the homeowners surveyed by Houzz last year said it’s important that their master bathroom be two-person compatible, an aspiration more likely satisfied by enclosing the toilet. But most homeowners agreed that the top priorities are an easy-to-clean bathroom and a bathroom with abundant storage.

In bathrooms with plenty of floor space, toilets are increasingly set off from the rest of the room behind a full-height partition or in a “closet” with a door. Half-height “pony walls” serve to isolate the toilet visually without making the bathroom feel smaller. Partial walls often incorporate other design elements, such as shower walls or benches. Photo: courtesy R.I. Kitchen & Bath

Another product—this one European—is becoming more common in the U.S. SFA Saniflo produces a line of pumping products that dispose of waste water and gray water without requiring access to drainage pipes below the toilet. This enables any space, even in a basement, to become a full or partial bathroom.

The system, called a macerator, was originally developed in the 1950s in France, where many buildings are made of concrete and brick rather than wood, says Saniflo CEO Regis Saragosti, who moved to the U.S. from France eight years ago. Saniflo’s macerator can be installed in just a day and is generally a simple job since there’s no need to access any plumbing under the floor, Saragosti explains.

Because the company sells its products through distributors, Saniflo officials aren’t sure exactly how many plumbing contractors have installed the line over the past eight years. But the installer base has grown dramatically, Saragosti says. He also notes that the biggest challenge the company faces in the U.S. is awareness and training. Still, company officials are confident that focusing on growing consumer interest will encourage more plumbers to learn how to install its products.

This article was originally published at ProRemodeler.com.