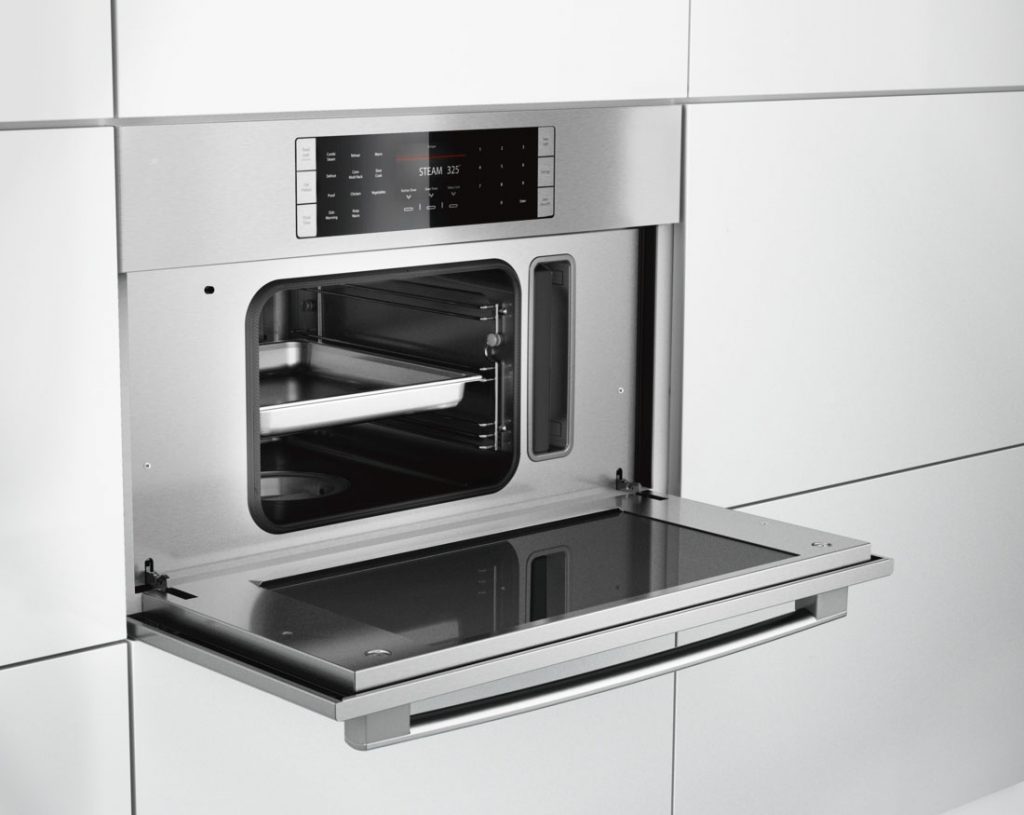 More and more homeowners want steam ovens as part of their kitchen remodels. Here’s how they work.

Homeowners are just beginning to learn what culinary experts have long known: Steam cooking rules. And as its popularity continues to grow, more consumers are adding steam ovens to their kitchen remodels.

While European companies Miele and Gaggenau have been in the steam market for years, more manufacturers—including Thermador, Sharp, Whirlpool, Wolf, and Bosch—have introduced steam ovens into their appliance line-ups. Most are combining steam with convection to offer “combination” ovens, for added versatility. While steam-only ovens lack the capability to brown meat or breads, a convection steam oven combines the best of steam cooking with conventional fan-forced heat, which allows improved browning capabilities.

“Convection steam ovens can do everything a regular oven can do, but faster and better,” says Janne Mahan, product specialist for Bosch. (Watch Bosch’s video about steam ovens here.) The combination convection-steam ovens are the most popular models because of their versatility. They have the ability to not only steam, but to bake, brown, roast, grill, defrost, and warm leftovers as well.

Before their surge in popularity, steam ovens were primarily used in European kitchens by chefs and culinary enthusiasts. As the option gained popularity in the U.S., markets on the east and west coast and in major cities were the main consumers, and manufacturers have slowly been expanding their line-up of combination ovens to meet the growing demand. Traditional electric ovens produce extremely dry heat, creating the need to bake food with extra fat or to baste the food while its cooking. But steam ovens use hot, pressurized steam, which maintains the moisture content of food without the need to add fats, making it a healthier cooling alternative to conventional ovens.

Steam cooking not only reduces the need for added fat but also retains food nutrients that are often lost in baking. While preparing healthier meals is a selling point for many, consumers are converting to steam ovens to save time, too. Steam heat is hotter heat—ovens can reach temperatures of 570° F and higher. For instance, cooking a chicken in a traditional oven takes about two hours, but in a steam oven at 212° F, it would take about 20 minutes, and a 14-pound turkey takes about 90 minutes.

Steam ovens need water to create steam, so most models utilize a small water tank—usually 1 to 2 quarts in size. The larger the water reservoir, the less often the need to refill it. Though higher-end models can be connected to a water line, special plumbing isn’t required for most steam ovens. When the oven is turned on, water flows through a water line into a reservoir in the bottom of the oven where an electric element heats the water. Once the water reaches 212° F, steam is released into the oven. In convection steam ovens, a fan circulates the air, keeping the temperature steady while avoiding hot or cold spots. Most steam ovens contain a tank that feeds water into a reservoir at the bottom of the unit. There, the water is heated to 212° F and is released as steam into the oven.

Most models have a condensation tank that will need to be removed and emptied after use. Some models come with a tube that is manually inserted into the drain hole each time the condensation requires draining. While most combination ovens have water tanks, not all have a condensation reservoir. All models require regular cleaning and maintenance, as they must be descaled and regularly have their water lines flushed. Long a staple in Europe, combination convection steam ovens have steadily gained market share in the U.S. As seen with this broccoli, cooking with steam (left) retains more of the food’s moisture than baking in a regular oven that uses dry heat. Photo: courtesy Jenn-Air

Cost Is a Consideration

While convection steam ovens are gaining in popularity, the cost is prohibitive for many. Prices range anywhere from $2,000 to $4,000 for basic models, to well over $7,000 to $8,000 for higher-end models from Gaggenau. Many cooking enthusiasts who want the benefits of steam without the hefty price tag of a full-size oven opt for less-expensive countertop models. About the size of a microwave, countertop steam ovens generally cost less than $1,000, and since steam ovens can be used to reheat leftovers, some homeowners opt to completely forgo a microwave oven (though you can’t reheat a cup of coffee using a steam oven).

As steam ovens continue to grow in popularity, manufacturers will keep introducing new models. “With 10,000 people a day turning 65, more of the population is beginning to make lifestyle changes to eat healthier as they enter their retirement years,” says Zach Elkin, director of brand marketing for Thermador. “We are now seeing a growth into more and more kitchens across the country, and a rise in the variety of steam oven options being offered.”

The price point of steam ovens has decreased as more and more players come into the market and consumer demand for more options has grown. Whether incorporating a steam oven as a second oven or changing over to convection steam as a daily-use oven, designers and contractors should consider the best alternatives for their clients, and homeowners should carefully weigh their options.

This article was originally published at ProRemodeler.com.