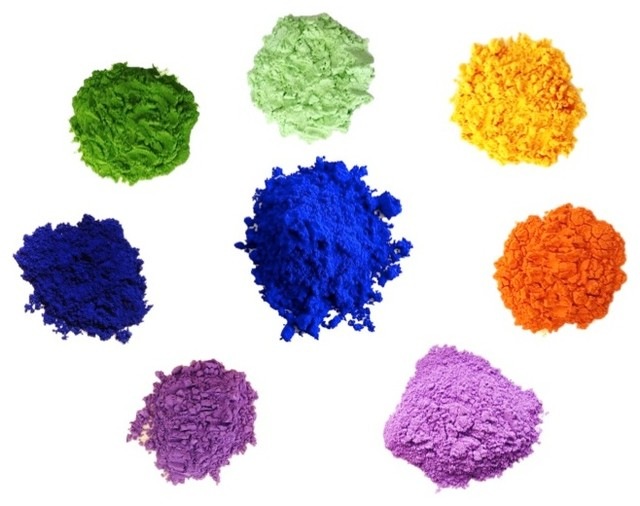 University researchers stumbled on a new blue pigment in 2009. Now they’re making others, which could show up in your home

Featured Image: At center is YInMn Blue, the pigment discovered in 2009. Around it are other YInMn pigments that have since been developed. Images courtesy of Oregon State University

Seven years ago, a student in a chemistry lab at Oregon State University accidentally created a blue material — the first time a new blue pigment had been discovered in 200 years. In the years since, researchers at the lab have methodically developed other new pigments in a rainbow of colors, the university announced Tuesday. These nontoxic, durable pigments are now in commercial development, and could soon appear in new paints for our homes and cars.

In 2009, the lab led by chemistry professor Mas Subramanian accidentally discovered a new pigment. In an attempt to create a material that could be useful in computers, a student mixed manganese oxide with other chemicals, heated the blend to about 2,000 degrees Fahrenheit (1,093 degrees Celsius) and showed Subramanian the resulting bright blue compound. “I was really shocked,” recalls Subramanian, who had been expecting the mixture to turn black. At first, Subramanian thought the blue had resulted from an error in mixing the compound. But when he had the student repeat the experiment and the same blue substance emerged, Subramanian realized he was looking at what could be a new blue pigment.

That new inorganic compound — dubbed YInMn Blue for the yttrium, indium and manganese it contains — was in many ways superior to existing blue pigments. It had cooling properties and could deflect the sun’s heat. It was nontoxic and more stable than organic blues found in nature, such as indigo, used to dye jeans. YInMn Blue won’t fade or change color, is impervious to heat and water, and isn’t affected by acid or oil.

All this makes the pigment ideal for coloring paint, especially for exteriors. YInMn blue has since been adopted by artists for use in their works, and Subramanian says that even the Vatican looked into it as a potential pigment for restoring the Sistine Chapel.

Chemistry professor and researcher Mas Subramanian leads the lab where YInMn Blue was discovered. He says blue is his favorite color.

Subramanian’s lab has tweaked the chemical structure of YInMn Blue, substituting zinc and titanium for indium, to create new violet and purple pigments.

The new pigments are more stable than existing commercial purple pigments and aren’t toxic or carcinogenic. Their cooling properties make them applicable for energy-efficient roofs of buildings, as well as for cars where reducing solar heat to save energy is desired, according to research findings on the violet and purple shades, which have just been published in Inorganic Chemistry, a journal of the American Chemical Society.

The chemical structures of the YInMn pigments are seen here.

Technically, the materials produced in Subramanian’s lab are not new colors, but rather new pigments. Colors are what our eyes see when light hits a surface and reflects back. “Nobody can discover a new color,” Subramanian says. “We made a new material.”

The new compounds, shown here, have been patented and are now in commercial development. Next up: His lab is on the hunt to create the elusive red. “It is very difficult to make a red inorganic pigment,” he says.