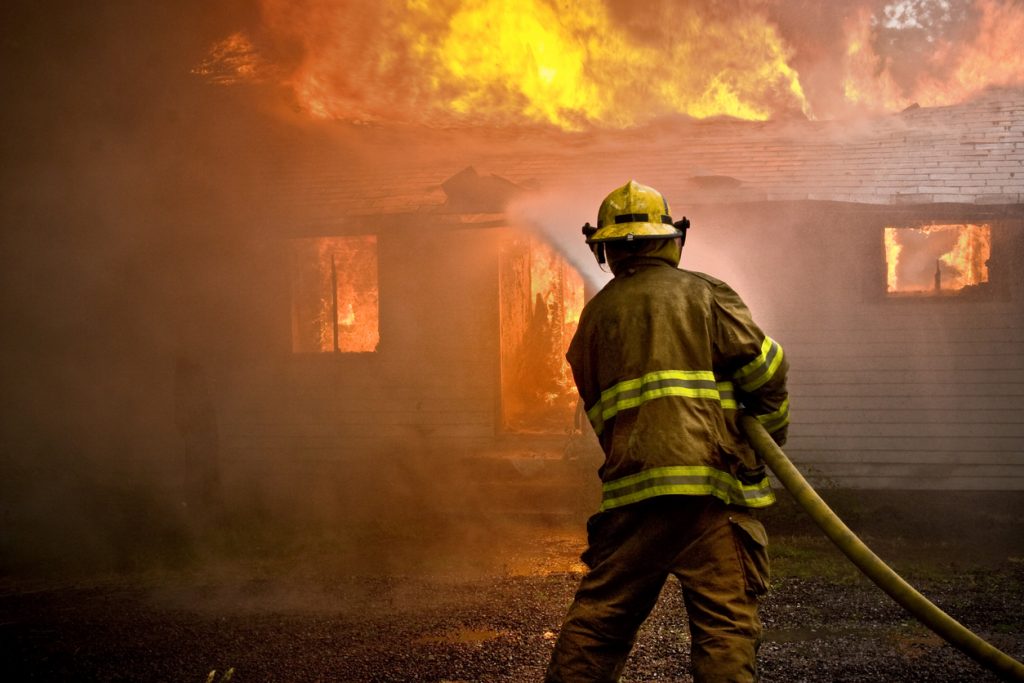 With temperatures (finally!) dropping, many of us crank up the heat at home—but a higher electrical bill isn’t the only danger we face.

Winter is the prime season for house fires: Nearly a third of all total-loss house fires occur in the months of December, January, and February, according to the National Fire Protection Association. Even scarier? The average household can expect five fires in the lifetime of its members.

That’s a lot of fires. And while most are small, they collectively cost us $7.3 billion a year in property damage—plus there’s a 1 in 10 chance that fire will injure someone in your home.

Many houses, especially old ones, have cold spots that central heating simply won’t reach—which makes plug-in space heaters a godsend. Unfortunately, these toasty devices are the leading cause of house fires in the winter.

We’re not telling you not to use them; just be sure to respect these rules. Make sure your heater is at least 3 feet away from anything flammable; plug your heater directly into the outlet rather than an extension cord; and although it may be tempting, do not go to bed with the space heater on.

“Most space heater accidents happen while everyone is sleeping,” says Peter Duncanson, director of disaster restoration training for ServiceMaster. You’re much safer bundled up in pajamas and warm blankets.

We all know how easy it is to step away from the stove for just one moment. But stovetop cooking is the leading cause of house fires year-round, and most occur within the first 15 minutes of cooking.

Know the song “Stand by Your Man”? Well, safety experts say, “Stand by Your Pan.” Make it a rule to turn off the stove if you must leave. If you’re baking something, you can leave the room, but check back at least once every half-hour, and don’t leave the house without turning off the oven.

Also, make sure that oven mitts, dish towels, and other flammable items remain 3 feet from the stovetop at all times—you’d be amazed by how quickly heat can travel.

If the worst happens and you’re suddenly faced with flames and spattering grease, don’t panic. Turn the stove off, then put on a pair of elbow-length cooking gloves. (Go ahead and order some now to have on hand.) Cover the pan with a lid, and let the oil cool down. Don’t move it—you don’t want to spill the fiery contents. Have a fire extinguisher when you eventually remove the lid.

We’ve all done it: We want the electric kettle, laptop, iPhone charger, and toaster to run from the same power outlet—so we add an extension cord or adapter to accommodate all of our appliances. Yet every year, overloaded or damaged circuits cause 3,300 fires.

Make sure you’re not one of them by, for starters, giving your cords a feel: If they’re warm, they’re overloaded. Also, never run extension cords under rugs, tape them to floors, staple/nail them to walls, or string several together to make an extra-large extension cord.

While it’s recommended you get your fireplace checked regularly, the reality is, it can start a fire even if your chimney passed inspection with flying colors, says Joe Torrillo, a firefighter who served in the New York City Fire Department for 25 years.

“It’s called pyrolysis,” says Torrillo, who now tours the country speaking as a fire safety expert. “It gets very hot in the fireplace, and the heat can transfer to the [connecting] wooden structure.”

So when you use your fireplace, make sure to extinguish the fire completely before leaving or sleeping, and keep flammable objects at least 5 feet away.

Be careful with the embers, too—they can smolder for up to two weeks and ignite other trash you throw out with them. The best policy is to empty ashes into a metal container and store them away from anything flammable for at least two weeks. Be sure to clean your fireplace and flue at least annually.

From 2009 to 2013, candles caused 3% of home fires and 3% of home fire deaths, according to the NFPA. But before you ditch all of your sweet-smelling blocks of wax, know this: The main problem is not the candles, but how we use them. Too many people light them on top of tablecloths or near curtains, which can easily catch fire.

“Candles should be burned within sight on a stable surface, away from anything that can catch fire and out of reach of children and pets,” says Carol Freysinger, executive director of the National Candle Association.

Because wax gets soft as it melts, a hot candle can tip out of its holder, igniting wood surfaces and shelves. That’s why you should never leave a candle burning unattended, or switch to battery-powered ones—these days they look and smell just like the real thing.

Don’t use those old bubble lights on your tree, even if they’ve been in the family for generations.

“Each light is 5 watts. With 100 5-watt bulbs, that’s 500 watts of heat” on a tree that’s slowly drying out, Torrillo says. Additionally, keep the tree away from sources of open flame and don’t overload sockets. According to the NFPA’s most recent data, Christmas trees cause an average of 210 structure fires annually.

Finally, here are some life-saving tips for all households.

Every home needs working smoke detectors—inside each bedroom, outside each sleeping area, and on every level of the home, including the basement. Test them every few months and completely replace them every 10 years.

Just because you have a fire extinguisher doesn’t mean you know how to use it. For example, if you spray the extinguisher directly into a pan of flaming grease, flaming spittle can go everywhere. Now’s the time to check out some instructional videos. Better yet? Swing by your local firehouse and ask the firefighters how to use an extinguisher.

We’re not just talking about walking out the front door. What if the route is blocked? If you really want to be prepared, keep an escape ladder inside every bedroom, Torrillo recommends, and practice deploying it to get familiar.

This article was originally published at Realtor.com.